Fucoidan
an amazing molecule in seaweed 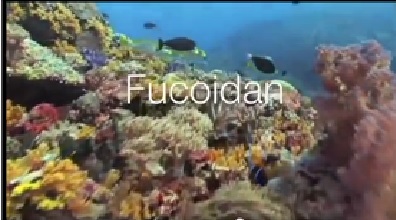 Fucoidan: Marilyn Vine does not normally start her website pages with a disclaimer but due to the powerful information that she has found in books, etc she feels it necessary to post the disclaimer at the top of the page.

The above being understood and accepted then Marilyn Vine would like to share with you some of the excitement she feels in relation to this particular ingredient with regards to health.  To learn about the amazing product I have taken for over ten years – click the link below.

Here is a diagram of Fucoidan’s chemistry. 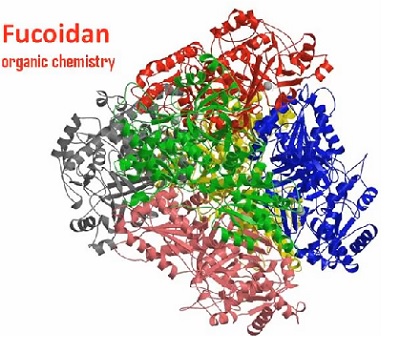 Before I begin to share the information below, I would like to let you know how I came to learn about it.

A medical doctor in a company I was involved with told me about a Japanese Doctor, Dr Daisuke.  He told me that Dr Daisuke was offering a free e-book on fucoidan.   I was extremely fortunate in that I received two hard copies of his book plus two very large testimonial books.  My doctor friend told me to be quick as he was saying he could cure cancer.  We all know that this is a big no no and that he believed his website would be taken down.   Subsequently it was.  When I received my hard copy it contained the card of a representative of the company and I phoned and spoke with him to ascertain if there was something other than fucoidan in his product which his testimonial book was telling me he was getting pretty amazing results.   I found that it didn’t and this gave me even more confidence in the product I am using.   I scanned Dr Daisuie’s book and down the page you will find a link so that you can download it and read the information that totally amazed me at the power of just one molecule.

All new information will be posted under this bookmark


Bookmark this Fucoidan page for the latest information.

NaturalHealth 365 on 6 October 2015 provides information on the slimy part of brown seaweed.  The article goes on to say:

“Inhibiting Cancer Cell Movement:  F. is actually the general term applied to a group of molecules that can be extracted from several seaweed species, although Undaria pinnatifida is perhaps the most well-known source. Numerous scientific studies have shown that fucoidan has the ability to stop cancer cells from spreading throughout the body by inhibiting molecules known as selectins.

The primary function of selectins is to facilitate the physical interaction and movement of various types of cells. The problem, however, is that cancer cells can take advantage of these molecules in spreading throughout the body. But fucoidan has been shown to prevent cancer cells from adhering to blood vessel walls and spreading.”

My passion in life is to inspire individuals to discover a whole new way of life and provide them the opportunity to live it by changing their lives through improved health and well being.

Prevent Disease on 24 June 2015 brings information on how an extract from fucoidan may provide promise for treating a type of inflammatory bowel disease known as ulcerative colitis, a new study published in PLoS One suggests.    Click this link to read the article

Clinical studies have shown that fucoidan can reduce the following.  Click this link to read all about the different studies and what they found.

A clinical study last updated by Sloane-Kettering Cancer Centre on 11 February 2011 just confirms for me all the wonderful attributes of F. They go on to say that its purported uses covers:


I personally believe that we should all be taking a fucoidan based product to help maintain our general health, let alone for people who may have medical issues that need dealing with.   The only contraindication that they mention is that fucoidan because of its anticoagulant property may (a possibility) have an effect on drugs such as warfarin and heparin.

Once again for me personally:   if I was in a situation where I required an anticoagulant then my choice would be fucoidan not warfarin (which is a known rat poison) or heparin.   I would be seeking a medical professional who could help me go down this path rather than the pharmaceutical path. That is my choice and it may not be yours.  As I say throughout this website – I only bring information to your attention – what you do with that information is purely your own personal choice and I can only wish you well.

I was fortunate to come across two books written by Dr Daisuke Tachikawa called F – Induce Apoptosis in Cancer Cells, Enhance Immunity, Suppress Angiogenesis & Reduce Side Effects of Chemotherapy and Radiation” and the second book ”Amazing & Joyful Testimonials – F – You Can Beat Cancer Too!!” around 2008.

This book covers so many different forms of cancer and these are just a few of the mainstream cancers that seem to be causing most concern today:

Dr Tachikawa identifies what Fucoidan is:

“F is found in marine algae (brown algae) such as mozuku (nemacystus decipiens), mekabu (the pleated section of wakame, or undaria pinnatifida, near the root), and kombu (laminaria japonica). The “slimy” constituent of sea vegetable is a rich source of fucoidan, which is a general term referring to a group of polysaccharides containing sulfated fucose.”

How one ingredient can do more for the human body

Leading researchers from around the world state they have never seen one ingredient do more for the human body than Fucoidan. I am aware of over 1,080 fucoidan studies on this government website.

Attached is a document which will give you some links to some of the studies undertaken on fucoidan.   This provides studies on:

Quite an amazing range! Click on the link to read more PubMed on Fucoidan.

This link gives some facts about F

F is a complex sulphated polysaccharide, derived from marine brown seaweed. There have been many reports on the biological effects of F on mammalian cells. Shibata and colleagues indicated that F derived from Cladosiphon okamuranus Tokida blocked the adhesion of Helicobacter pylori to a human gastric cell line Therefore, F may be useful as a dietary substance for preventing human disease because its polysaccharide causes no toxicity or irritation. In this study, we examined the effect of Fs derived from various brown seaweeds on the production of IL-6 in a LPS-stimulated murine colonic epithelial cell line. Moreover, we determined the improved effect of F on murine chronic colitis in vivo.

Click on the link to read the PubMed article.

F is a sulfated polysaccharide (MW: average 20,000) found mainly in various species of brown seaweed such as kombu, limu moui, bladderwrack, wakame, mozuku, and hijiki (variant forms of F have also been found in animal species, including the sea cucumber).

Substantial pharmaceutical research has been done on F, focusing primarily on two distinct forms: F-fucoidan, which is >95% composed of sulfated esters of fucose, and U-fucoidan, which is approximately 20% glucuronic acid. As a consequence of this research, U-fucoidan and F-fucoidan are now being marketed as a nutraceutical, a supposed "miracle drug", and a food supplement.

Researchers began studying F around 1970, and since that time F has been cited in approximately 700 studies published in the National Library of Medicine's database. The overall findings of this large body of research, coupled with anecdotal evidence provided by a long history of use of F-bearing seaweed in areas such as Japan, Hawaii and Tonga, indicate that F demonstrates great potential as a safe nutritional answer for a wide variety of health complaints. F is found in the sea plant called Limu Moui.

A study released in 2005 by Japanese researchers have indicated that F. can induce apoptosis in human lymphoma cell lines; as well, French researchers showed in 2002 that F. can inhibit hyperplasia in rabbits.