The majority of Australians are totally unaware of how our rights and freedom have been over-ridden.    Nor do they understand that ALL the political parties DON’T recognize Common Law of England whereas the people don’t have any rights.  Political parties changed Constitutional definition of Commonwealth, therefore only recognize the politicians' definition of Commonwealth.

A saying has come to light:

“Politics is the science of fraud, and politicians are the professors of this science.”

Common Law of England is entrenched throughout the Commonwealth of Australia Constitution Act 1901 as proclaimed and gazetted consisting of its Preamble Clauses 1 to 9 and the Schedule.

To learn more about this please click this link.

Fortunately for us, we have an Australian, Dick Yardley, who has taken the time to acquaint himself with our original constitution and the treasonous/illegal constitution that we are all being purportedly governed under at the present time, May 2022.

Oxford Dictionary: purport v. appear to be or do, especially falsely

Decisions taken in the High Court of Australia


Here is a document outlining decisions taken by Justices in the High Court of Australia.   Please click this link to read.


Dick has compiled a document covering the Legislation that has illegally and treasonously been enacted over many decades to bring us to this point in time where we have no rights whatsoever.  The illegal Political Parties removed the Common Law of England, King James Bible, Magna Carta, Bill of Rights, Habeas Corpus, etc. etc.

Under our Commonwealth of Australia Constitution Act 1901 as proclaimed and gazetted and stipulated in the Preamble Sections 1 to 9 that this could NEVER be changed.

Understanding what has unfolded since our original Gazettal can be quite overwhelming especially if you have been totally unaware of the deceptions, as the majority of Australians are, and carried out on the people and removing their individual rights and freedoms.  Dick endeavored to provide this information in as simplistic form as possible to enable the average Australian to understand.

New independent political parties are springing up right around the country.   Sadly, when these new parties register to enable them to participate in an election, they are forced to register using the illegal corporation’s enrollment process and thus it puts these independents into the same category as the existing parties.   Under this process our sovereign rights as people are totally unprotected.

Dick has the complete documentation pertaining to all the changes made over the years and is able to produce the documents in verification of what he is reporting.

Dick has also written a free e-book in pdf form “Treason, Treachery and Sabotage” and can be obtained at this link.    This book can also be obtained via Marilyn’s free-ebook webpage.

I, Marilyn Vine, am very grateful for the hours that Dick has willingly given me to assist me in understanding what has been happening over a period of time.

Please click this link to see further information on the © Commonwealth of Australia 2012 Constitution which under this Constitution protects:

It should be noted that they are using their own political parties republic seal.   Remember under our Commonwealth of Australia Act 1901 as proclaimed and gazetted that Australia is a Constitutional Monarchy and not a Republic or Democracy.

Seals are the Authority of what is below the Seal; therefore Seals can only be used for what would pass the Seal. Political Parties, Treason by using purported Seals to cover the Signet, the authority of commissions appointing the Governor-General and State Governors.

"Signet", means the seal commonly used for the sign manual of the Sovereign or the seal with which documents are sealed by the Secretary of State in the United Kingdom on behalf of the Sovereign."

Please click this link for information on Australian Seals

·        Shareholder Capitalism – A Global Economy that works for progress, people and plant – a book written by Klaus Schwab with Peter Vanham


This Act brings forward Imperial Acts that have not been removed at Federation.

After Federation we can’t remove any Imperial Acts.

Victoria joined the status of the Commonwealth of Australia as a sovereign, independent and federal nation in 1975.    Click this link to read the gazzetal.

The amount of treason in this country is, to a lot of people, beyond belief.

Australians did you know that we have two high courts?

Australian Political Parties under their Treasonous definition of Australia created their own private High Court of Australia.  Click this link to access this information 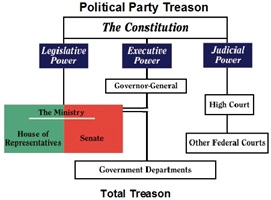 Bill of Rights 1689
Grants of Forfeitures.


Under the Commonwealth of Australia Constitution Act 1901 the Australian currency was to be in “pounds”.   Please click this link to understand how our currency was changed from pounds to decimal and registered in the United States Department of Commerce Patent and Trademark Office, Washington DC 20231.   Click here to learn more.

An abstract Australian country, theoretical rather than physical
Takeover by Definition of Change.

Once again Dick Yardley has done an amazing job in preparing another document for us to read and understand.   Here is how Dick expresses his feelings on this document.

Stephen Limbery together with Dick Yardley are holding zoom meetings every Wednesday and Thursday evenings commencing at 7.30 p.m. until 9.30 p.m. NSW time.  These meetings are covering common law and explaining the various legislation that has been passed by the corrupt, illegal corporations purporting to act in Australia’s best interest.  Many lively discussions take place and some very well informed people participate in these calls.

Here is the link and then select the Wednesday/Thursday night link.

In the meantime, click this link to read Dick’s document “Takeover by Definition of Change.”

Definition in the Oxford Dictionary of Law – Misprision

Misprision n.  Failure to report an offence.  The former crime of misprision of felony has been replaced by the crime of compounding an offence.

However, the common-law offence of misprision of treason still exists, this occurs if a person knows or reasonably suspects that someone has committed treason but does not inform the proper authorities within a reasonable time.

Truth is Treason in an Empire of Lies


Here is a document outlining the Treasonous Acts by Political Parties

sitting under their own private Party Constitutions.

These Australian Parliaments and Religious leaders have removed all rights.   In case you think that the information contained in the above document does not affect you I give you an excerpt from page 4:

Lands Acquisition Act 1973, No. 208 (Clth) of 19th December 1973
which created their own “Australian Land”
4 (1) Section 7 of the Principal Act is amended--
(a) by omitting from sub-section (1) the words " The Governor-General”
and substituting the words "The Minister" = TREASON

Kim Beasley in Federal Parliament in 1990, quote, “The United Nations has given the Federal Government a mandate of ownership for housing, property, farms and businesses to government control once the Republic has been proclaimed.”

Parties Definition of Australia created in 1973.